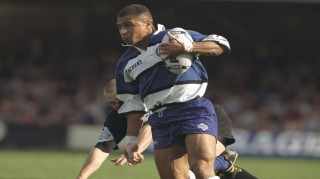 Jason Robinson’s first taste of top flight Rugby Union action was, like rugby league colleague Henry Paul, in the 87pts-15pts annihilation of Swansea in the Anglo-Welsh tournament. Robinson got off to a flier crossing for two tries on his debut and showing the watching crowd just why his nickname was ‘Billy Whizz’. Devastatingly quick, given just inches of room,  he was incredibly difficult to bring down. Selected on the left wing in the following league match at home to Wasps didn’t pose any problems either as despite Bath losing 36-40, Robinson scored again. And, in his third match he repeated the trick, this time on the right, as Bath won 45pts-29 ptsat Kingsholm. Having established himself in the team, Robinson played at Llanelli before two more tries in a 56-31 win at London Irish and a try in the Heineken Cup against Edinburgh took his tally to seven tries in six matches. Sadly for both Robinson and Bath he was destined not to score again in his remaining eleven matches for the club that saw him total 14 appearances in all. This was no failing on Robinson’s part as Bath continued to be free scoring and yet doubts somehow still persisted. A disappointing run out at full back against Cardiff in Europe gave the critics some much-needed ammunition and when he departed back to league in January 1997 he had failed to convince everyone of his worth as a union player. His final game for Bath was in a 6pts-22pts defeat at the hands of Harlequins at the Stoop. Jason continued to thrive at league for a successful Wigan side, before switching codes and signing for Sale Sharks, going on to make his senior debut for England as a replacement against Italy in 2001. He was then selected for the British Lions tour to Australia where he scored ten tries, including scores in the first and third tests and five on his debut in a rout of the Queensland Presidents XV. Robinson opened his England account crossing for four of England’s twenty tries in the 134pts-0pts win over Romania in the last of the 2001 autumn internationals. He then went on to star in the opening match of the 2002 Lloyds TSB Six Nations Championship with a brace of well-taken tries in the 29pts-3pts win over Scotland at Murrayfield. Regular caps followed and the tries continued to flow culminating in a scintillating touch down in the 2003 Rugby World Cup Final against Australia in Sydney as England were crowned World Champions. Shortly afterwards Jason, along with the rest of the RWC winning squad, received an MBE.

Also Played For: Sale Sharks and Fylde and Hunslet (RL)