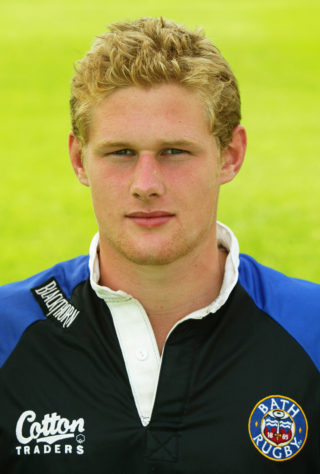 Talented number eight Chris Goodman was drafted into the first team squad for the beginning of the season 2003/2004 after some impressive displays in the club’s feeder teams the previous year. Born on the 6th July 1985, the 6ft 2”, 15st back row man was first glimpsed in Bath colours during the pre-season clash with the Celtic Warriors, crowning a replacement appearance (he came on for Isaac Fea’unati) with a well-taken try in the 29-22 victory. Chris had to wait for his senior debut in a competitive fixture though with his chance finally coming in the 75-11 rout of L’Aquila in a Parker Pen Challenge Cup match in December 2003. Goodman played in his favoured number eight position in a back row that also included James Scaysbrook and Scott Gray. Following the win coach John Connolly chose an unchanged side for the return leg enabling Goodman to claim a second full appearance.