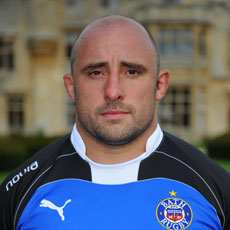 One of the most destructive looseheads around, David Flatman originally joined Bath Rugby in 2003 from Saracens.

Incredibly effective technically at scrum time, David became a cornerstone of the Bath Rugby pack in his time at the Club. He was the epitome of a professional rugby player and a highly valued member of the squad both on and off the field.

His impressive form during the 2009/10 season saw Flatman recalled into an expanded England squad to tour Australasia over the summer, having previously won eight caps for England.

At age 32 David was forced to retire after Achilles, shoulder and finally hand injuries had taken their toll.

David played 182 games in the Premiership and 53 games in major European competition making a total of 235 games in the top flight.

David Flatman started his rugby career with Maidstone RFC before signing for London based Saracens in 1998, breaking into the England test squad at nineteen, the youngest prop ever to do so. Previously ‘Flats’, as he is popularly known, had pulled on the white shirt of his country at Schools and U21 level. His first stint with the full England squad saw David playing in the midweek team and then gaining caps on the 2000 tour to South Africa. A product of Dulwich College, Flatman made 97 appearances for Saracens before signing for Bath Rugby in the close season of 2003. His first appearance in the Blue, White and Black was in the pre-season friendly against the Celtic Warriors at Sardis Road, Pontypridd and his competitive debut was a week later against Leeds Tykes at Headingley in a 44-32 victory in the opening league match of 2003/2004. After an outstanding start for Bath Rugby David was voted Rugby Times Player of the Month for September 2003 and his consistency raised expectations of an international recall to go alongside his eight full caps that he had already accumulated – the last of which was on the 2002 tour to Argentina.

Is a freelance journalist and TV pundit.