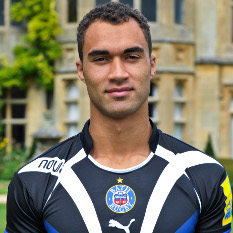 His potential having been spotted by Bath Rugby at the age of 15, he was duly selected for the club’s development squad. Hailing from Keynsham, Woodburn’s schoolboy and club rugby exploits were soon repaid when he was chosen to represent Somerset County.

Woodburn made his debut for the Bath Rugby 1st XV in October 2011, scoring a try against Newport Gwent Dragons in the LV= Cup just 2 minutes in to the game. His try-scoring abilities were very much to the fore during Bath’s 2013/14 pre-season, the winger scoring a brace against both Jersey and Scarlets.

Stamina, speed and strength are hallmarks of Woodburn’s game.