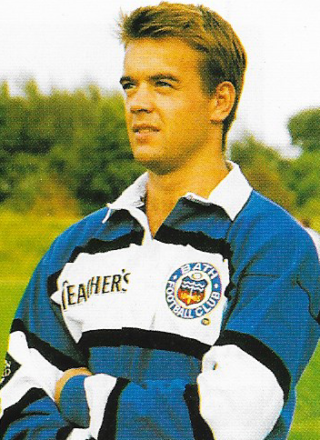 Great player with great skills and a wicked step

Rich Butland was born in Cape Town, South Africa, but qualified for England by virtue of having dual nationality. This led to the talented fly half representing England Students at outside half and England ‘A’ in 1996. Butland signed for Bath in 1994 whilst still studying at Bath University on a Sports Scholarship. His Bath Rugby debut came in a 33-26 win over Oxford University on the 12th November 1994and prior to the professional era made 26 appearances for the club registering 169 points from six tries, 36 conversions, 21 penalties and 3 drop goals, deputising for Mike Catt when called upon, on one occasion playing in the 1995 Pilkington Cup Final. The product of Wellington College in Berkshire, Butland showed skill and vision in his time at Bath, making his first start in the professional era in an 87-15 thumping of Swansea in the Anglo-Welsh Cup, a game in which he scored a try. Irregular appearances followed (he completed 17 matches in 1996/1997, but was a starter in just eleven), but his points total continued to climb as he accumulated points whenever selected. In the 1997/1998 season Butland became more of a regular in the side playing in 22 matches and scoring 92 points including six tries, one of which ensured a crucial win at Pontypridd in the Heineken Cup. The lack of first team opportunities caused Rich Butland to look elsewhere for the 1998/1999 season and he duly signed for Richmond for a short spell. Latterly he was seen displaying his not inconsiderable skills on the Beach Rugby circuit for England. His promise suggested that he may go further, but with Catt ahead of him in the queue for the number ten shirt, Butland was forced to play a bit-part role in a nevertheless excellent career with the club.