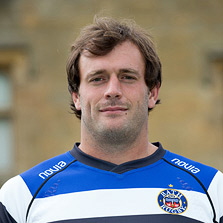 Final game: 2016 before re-joining Bristol on a one year contract.

Luke Arscott joined Bath Rugby in the summer of 2014 from West Country neighbours Exeter Chiefs, where he had been a key man for the Devon-based club making 98 appearances.

The full back played for his hometown team, Plymouth Albion, for three years before joining Bristol Rugby in 2006 making 82 appearances. He returned to Exeter four years later, rejoining the club he first played for as a teenager.

Arscott was part of the Chiefs side which raised the LV= Cup in 2014, the first major trophy in their 143-year history.