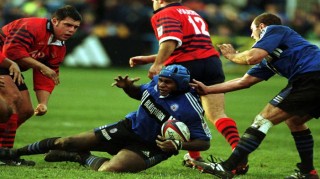 The Bath career of Australian-born flanker and lock Mark Gabey lasted two seasons and amounted to 37 matches (25 starts and 12 as a replacement) and yielded two tries. A real fans-favourite, Gabey signed for Bath in time for the beginning of the 2000/2001 season and was first sighted in Bath colours during the pre-season matches against Llanelli at Stradey Park and Edinburgh at Keynsham. He then made his senior debut, along with a host of other Bath new boys, in the 31pts-32pts defeat to Sale Sharks at Heywood Road, coming on as a second half replacement for Martin Haag (as he had done in the two pre-season matches). The former Bristol and London Irish forward went on to make twelve appearances that first season (scoring a single try at home to Rotherham), but struggled to break the second row axis of Steve Borthwick and Haag, the latter enjoying a resurgence of form in his final year. Despite a better run in the team in 2001/2002 (26 games), the signing of England international Danny Grewcock from Saracens meant a regular run in the side was difficult to achieve and at the end of the season Mark decided that the time was right to move on. Gabey’s final match for Bath was the 22pts-24pts home defeat by London Wasps on the 12th May 2002 where he replaced Borthwick in the second row and showed his versatility by ending up at flanker after Gareth Delve was injured. Towards the end of the campaign it was announced that Mark would be joining former Bath Rugby team mate Ben Clarke in a bid to bolster Worcester’s pack as they attempted to attain Premiership status.