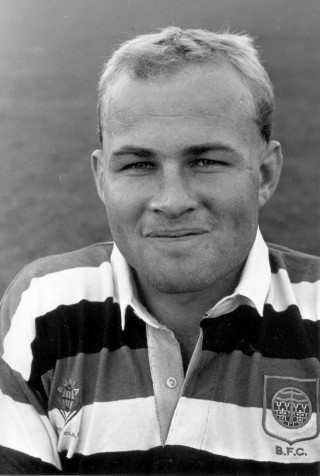 Andy Robinson made his Bath Rugby debut as a replacement in a 26-10 win over Plymouth Albion way back in September 1984. That was the prelude to a long and successful career with the club that was to see him rise from bit-part player to international in both terms of playing and management. Robinson was to make the Bath open-side flanker position his own in the 1985/1986 season following the forced retirement of former captain Roger Spurrell. Honours continued to be bestowed upon him as he was selected for the South West, making his divisional debut in the 1986/1987 season and followed that up with England ‘B’ caps against Italy (one try) and Spain, before reaching the pinnacle and gaining a first senior England cap in 1988 against Australia in Sydney during the 1998 tour to Australia and Fiji. He made six appearances on that trip and crossed for three tries enhancing his reputation as a devastating game-breaker. Back home his star continued to shine brightly and another superb season with Bath saw him named European Player of the Year in the 1989 Five Nations Championship and consequently obtaining selection on the 1989 British Lions tour to Australia. Robinson was kept out of the test side by the presence of Captain Finlay Calder, but performed well in the unbeaten midweek side, making six appearances and scoring two tries. Incredibly for such a determined player, after a try against France at Twickenham in 1989 and a narrow defeat to Wales, he was to be left out of the test match arena for seven years before returning in a 14-24 loss to newly crowned World Champions South Africa at the home of England rugby. His leadership skills were obvious for all to see and he captained Bath and the South West XV in 1991/1992 as Bath won the double. He was Captain again two years later as Bath won the 1992/1993 Courage League Championship. During the rocky first season of professionalism, Andy was appointed as Bath Rugby Head Coach and managed to settle the ship, as he drew the curtain on a first class playing career of 249 matches for the club with a final appearance at Sale (a 5-11 defeat). As Head Coach he led Bath to a win in the European Cup Final in 1998 and to their best League performance finishing second in 1999/2000 season. His management qualities were being watched at the highest level and former Bath Coach Clive Woodward had no hesitation in appointing him assistant coach for England at the end of that 1999/2000 campaign. He later went on to become assistant coach to Graham Henry on the often-stormy 2001 British & Irish Lions tour to Australia and assisted Woodward to World Cup glory in Sydney in 2003, gaining an OBE in the process.

Coaching Career: Apart from his coaching with England and the British Lions he has also coached Edinburgh, Scotland A, Scotland and was Director of Rugby at Bristol.