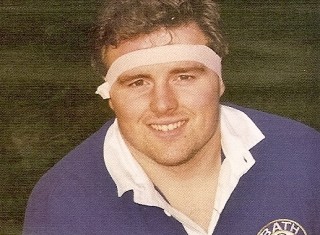 Joined Bath from Bristol in July 1992.

Scottish international prop Dave Hilton began his career in English club rugby at the Memorial Stadium, Bristol, before signing for Bath in the summer of 1992. The burly forward had to wait to make his first team debut, but eventually pulled on the shirt in a 51-0 thumping of Blackheath at the Rec. in October of that year. In the amateur era Hilton played for Bath on 58 occasions and his excellent foraging displays ensured that he would be an integral member of the squad come the professional age. During the professional era he memorably crossed for four tries, including two in five days against Bristol and Benetton Treviso in October and November 1996. His final match for Bath also yielded a score, as he crossed for one of twelve tries in a vintage Bath performance that saw the club hammer London Scottish 76-13 on the final day of the 1998/1999 season and thus ensured European qualification. In total Dave played 132 times for Bath and scored nine tries before moving to Glasgow Caledonians for the 1999/2000 campaign, later returning to Bristol Shoguns. In addition to success at club level, Hilton has been capped 42 times by Scotland (scoring one try against Wales) and played in four matches for the Barbarians, touring South Africa with the representative side in 1994. He made his test debut in 1985 as a replacement for Alan Sharp of Bristol against Canada.