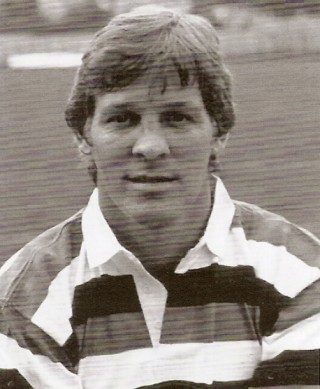 A supremely gifted  player who was overlooked by England when in his prime. He was a talented cricketer (as a schoolboy scoring a double century on two occasions) and hockey player.

He was Rugby captain at unbeaten Prior Park School and first appeared for Bath at age 17 against Northampton on the 9th April 1975.

Full playing record:- 3 Caps for England; two against South Africa in 1984 and he came on as a replacement against Ireland in 1986.

The record of ‘J.P.’s season of captaincy:-

He appeared 4 times for the Barbarians scoring 2 tries.

Palmer’s all-round ability is best summed up by Brian Jones in his admirable book – ACE OF CLUBS: “Palmer in the words of the old watchers, had a beautiful pair of hands and was a magnificent kicker of the ball from those hands. His balance and his ability to change pace and to time his passes perfectly, were other assets. But it was his capacity to see openings, and add abrupt changes of direction, so wrong-footing his opponents, followed by sudden acceleration, that made him so exciting a Centre, deft, darting and at times dazzling in his creation.”