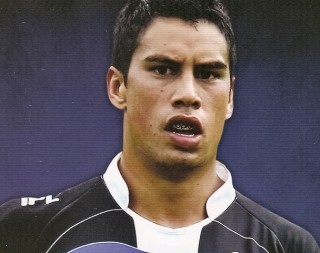 Shontayne Hape joined Bath Rugby in the summer of 2008 from the Rugby League club  the Bradford Bulls on a three year deal.
Hape had already gained 14 caps for New Zealand in Rugby League and achieved trophy success with Bradford during his six years at the club.
Before the beginning of the current Rugby League season, Hape had scored 83 tries for Bradford Bulls in 131 games. Previous to playing for Bradford, he played for the New Zealand Warriors (now Vodafone Warriors) in the Australian NRL.
Now regularly featuring at centre, this exciting player has become a firm favourite in the Bath backs line and has complemented Ollie Barkley well.
His impressive displays during the 2009/10 season saw him named in the England squad and his consistency saw him gain his first cap for the national side.
Shontayne left Bath to join London Irish where the coaching skills of former Bath player Mike Catt would influence Shontayne’s threequarter play in the future.

Joined London Irish RFC from Bath and from there he transferred to Montpelier. Sadly he was forced to retire from playing in 2013 having suffered several severe concussions which left him with decreased brain function.