by Peter Hall and Steve Bird 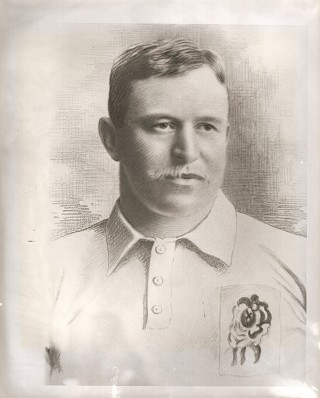 Frank Soane captained Bath for an unprecedented and unequalled 8 successive seasons, making over 300 appearances and enjoying a 50 year association with Bath Football Club.  During this time, he also represented Somerset (45 matches), Western Counties (5 matches), the South West (3), the Rest of England (2) and finally was selected by England for whom he won 4 caps, being only the second Bath player to appear for his country.  He also played 3 in 3 matches for the Barbarians.

Although not an especially big man, in the physical sense, (5ft 9in tall and 13 stones), he was a fearsome forward with a reputation for his fearless tackling and remarkable strength that earned him the nickname “Buster”.  He was also a forceful personality, engendering tremendous loyalty and affection amongst his team mates and was a powerful influence both on and off the field.

He joined the club as a 15 year old in the 1881-82 season from the Oldfield Park Club, making an impromptu debut after going to watch a match at Lambridge where Bath were a man short.  Playing in his trousers and shirt, Bath were so impressed with his robust play that they asked him to play again, thus triggering a lifetime of service to the club.

Somerset County Handbook records his term of County Captaincy for the 1896-99 seasons. He also served as  Honorary County Secretary during that period. He received the final accolade of election to the Somerset Presidency in 1900.

In addition to his inspired captaincy at Bath Frank was an influential driving force in the move of the club to the Recreation Ground.  For years, Bath had been nomadic, playing on grounds at Kensington Meadows, Lambridge and Henrietta Park before, in 1894, he chaired the negotiations with the Bath and County Recreation Ground Company to move their permanent home to land at Pulteney Meadows, the site of the current “Rec”.

His last appearance for Bath came in 1899 against Bristol, although he remained a towering presence off the field, serving on the Management Committee for many years having retired from playing.  He was also a prominent member of Avon Rowing Club along with fellow Bath player Frederick Belson.  In later years, the athleticism of this remarkable sportsman was channelled into golf.  He was frequently in demand at Club functions as an accomplished and witty after dinner speaker until his death at the age of 66 in 1932.