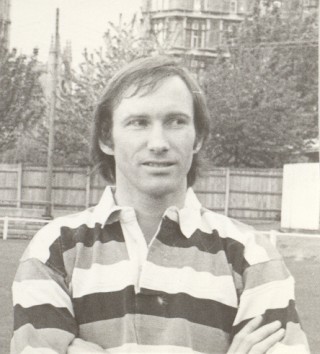 Retired following the match on 28th April 1981 v J Kendall Carpenter XV. However in 1984 he responded to a call from the club to act as “injury cover” and consequently his final game was on 18th January 1984 v Royal Navy.

Between 1984-86 he assisted Jack Rowell and Dave Robson as Backs coach.

Mike Beese learned his rugby at Keynsham Grammar School. He joined Bath at the start of the 1968-69 season, making his debut against Clifton at the age of 19. He then moved away to College and joined Liverpool Football Club (RFU) playing there for four seasons one of which as club Captain. Mike played for Liverpool during term time but also played for Bath when otherwise available. He returned to Bath in 1973, taking up an appointment as a local authority planning officer.

Mike’s meeting John Horton at Bath College aided John to decide to play for Bath rather than Bristol .

During his captaincy Mike convinced the Management Committee to accept Jack Rowell’s offer to coach Bath which heralded the emergence of a new era of exciting and successful rugby for the club.

Mike played for 13 seasons (at times with some fine players namely John Palmer, John Davies, John Horton, David Trick, Derek Wyatt and Jim Waterman)  during which he made 317 appearances, a record for a centre, and scored 95 tries.

Having retried from playing Mike was invited to join the coaching team and became backs coach in 1984 until after the John Player Cup final success in 1986.realising that the “professional approach” required greater commitment than his working life allowed .