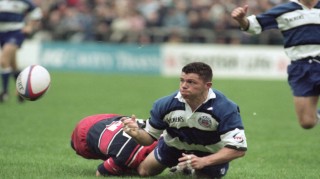 Henry Paul arrived at Bath in September 1996 heralded as one of the greatest rugby league talent’s around. He made his rugby league international debut at 19 while playing for Te Atatu and played for Wakefield Trinity, before signing for Wigan. The Kiwi international had starred for Wigan in the Challenge matches against Bath in the summer preceding the first season of professionalism. Bath Rugby had broken new ground again, playing the League champions at Maine Road and Twickenham.  From these unusual matches a bond was initiated between the two clubs and Bath ‘borrowed’ Paul and until the new Super League campaign started. Paul made a sparkling debut for Bath crossing for a brace of tries and being involved in several others as Bath romped to a 13-try 87pts-15pts thrashing of Swansea in an Anglo-Welsh encounter. His ball skills and angles of running brought a new dimension to an already star studded Bath backline. He went on to complete nine matches for Bath, starting all bar one and playing at full back, centre and wing. Indeed he covered almost all the back positions with his replacement appearance being at fly half for Mike Catt in the Heineken Cup win in Treviso. Paul scored three more tries in his spell at the club, one against Dax in Europe and another brace, this time against Bristol in the spectacular 76pts-7pts victory. His final match for Bath was in the Heineken Cup Quarter Final defeat at Cardiff where he played on the wing. He returned to Wigan RL before signing for Bradford Bulls RL and then joining Gloucester RFC in the summer of 2001. After a successful start to the year with the Cherry and Whites, Paul was selected for England ‘A’ in their initial match in the ‘A’ Six Nations Championship, a 6-6 draw with Scotland. He retained his place for the subsequent home defeat to Ireland at Northampton Saint’s plush Franklin’s Gardens venue and went on to play a huge role in the England success at the 2002 Hong Kong Sevens. Henry made his debut for the full England side as a replacement in the defeat in Paris in 2002 ,going on to win five further caps as a replacement three years later.