by Russell Gibbs and Geoff Pillinger and Mike Curling 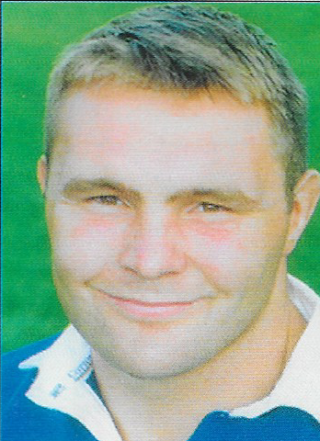 Mr Consistent would be an apt name for Bath Rugby’s John Mallett, who at the end of the 2001/2002 season had completed eleven seasons with the club. Signed as a raw student at Bath University, John made his first team debut at Clifton in a 30pts-7pts win and up to the conclusion of his eleventh year had passed the 150 game mark. A solid, unspectacular scrummager, John crossed for two of his five tries prior to the professional era, and then doubled his tally in the 1996/1997 season with scores against Coventry and London Irish. He had to wait almost four years for another but it was worth the wait as he gleefully touched down in a home win over Sale Sharks. It was to be the last try in his club career as after a further two seasons of excellence ‘Shep’ announced his retirement from the game having made a not insubstantial 219 appearances in the colours of Bath. He was rewarded for his excellence with a testimonial match at the Recreation Ground when a team of Bath All-Stars from the past gathered take on the Bath present XV in an entertaining match that was a thoroughly deserved recognition of a glittering career for one of the most loyal players that club rugby in England has produced. It’s unfortunate for John that he did not gain the international recognition he deserved; the sum total of his test experience being a solitary cap against Western Samoa for England during the 1995 Rugby World Cup in South Africa as a replacement. Selected to tour with England in 1994 (to South Africa) and 1997 (to Argentina), injury struck him down and further caps were not forthcoming. John has also been selected as a Barbarian, playing in matches against Leicester Tigers and the Combined Services.

John, at the time of writing, is Master in Charge of Rugby at Millfield School

Transferred To: Retired. Is now a master at Millfield School where he is head coach of the 1st XV.