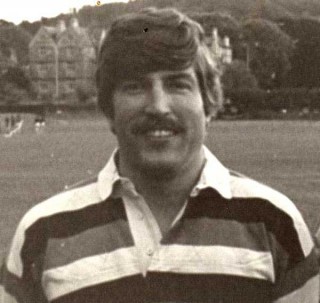 Geoff , who was born at Lower Swainswick on the eastern outskirts of  Bath on July  5th, 1950, was a product of Keynsham Grammar School. Much of his early rugby was at centre but he then switched to the back row and won Somerset 19 group schools caps. After leaving school he joined Bath Colts and captained the side for one season before moving up into the senior teams, making his first XV debut against South Wales Police
in November 1971. In his early seasons he made only occasional senior appearances but established himself as a regular member of the back row in the mid 1970’s and played County Championship rugby for Somerset.

Geoff  announced his retirement from playing rugby at age 29, due to a recurring back injury problem. He did, in fact, make himself available for a few more games, but his association since joining from Keynsham, ended at a disappointingly early age.