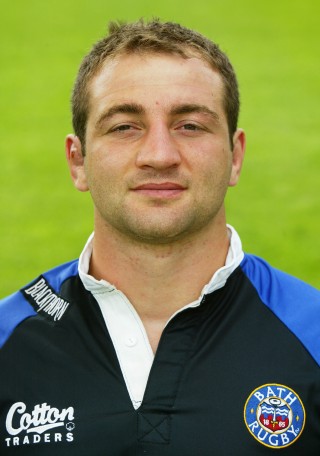 England international Steve Borthwick made his Bath Rugby debut on the 14th November 1998 in a home friendly win over Swansea. The Carlisle-born lock forward was signed from Preston Grasshoppers were he had been earning rave reviews for his performances and since that opening match for Bath he has never let the side down, being consistency personified. In his first season with Bath (1998/1999) Borthwick started the campaign by sharing the second row duties with veteran partnership Martin Haag and Nigel Redman, but by the end of the campaign the youngster, who had captained his side (Hutton Grammar) to the Daily Mail Schools Cup Final, had made the number five shirt his own after some outstanding displays. He was a virtual ever present in 1999/2000 making 30 appearances for the club missing only three matches all season (the league fixture with Bedford (away) and the home friendlies against Saracens and Glasgow). He even registered his first ever try for the club, in the 56-15 away win over Padova in the Heineken Cup. 2000/2001 was a stand out year for the second row as he made his England ‘A’ debut, captaining the side in the matches against Wales, Italy and Scotland and crossing for tries in the matches with the latter pair. This led to a call-up by Clive Woodward for the full international side, but lasted just twenty minutes before being led off with a head injury. In that short period of time though Steve had demonstrated his World-Class abilities by comfortably controlling the lineout at the tender age of 21. Back with Bath he completed 32 matches by the end of the season, being involved in every first XV fixture in domestic and European competition. Indeed, despite England calls at ‘A’ and full levels, he started every match bar the home win over Sale (in which he replaced Mark Gabey in the second half). His performances at club level were enough to warrant a place on the 2001 England summer tour to Canada and the USA where he appeared in all three test matches. Upon the commencement of the 2001/2002 season though, Steve found himself further down the pecking order as far as international caps were concerned, as the England management preferred Leicester Tigers Ben Kay as a partner to Danny Grewcock while Martin Johnson was banned. This didn’t deter Steve though and he completed another sterling season for Bath playing in 28 matches and winning a fifth cap in the 134-0 rout of the Romanians at Twickenham in the autumn. Back with Bath things couldn’t have been better for Steve as he cemented his place in the side with a series of rock solid performances playing 24 times in 2004 (and crossing for a career-best two tries!), and a further 28 times the following year. His consistency was rewarded with further international honours and in 2004 Steve played a part in five of England’s toughest matches, including the summer tour to Australia and New Zealand.