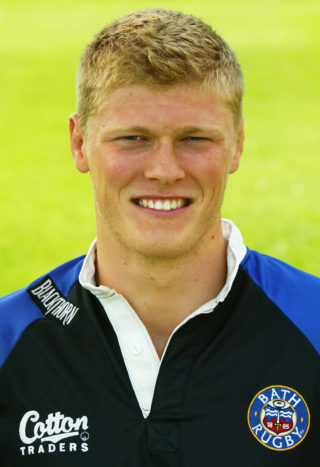 A lock forward signed from the Bath Academy, James Hudson spent most of the 2001/2002 season in the Bath United side, playing in what little matches they had (the United fixture list was severely truncated due to injuries to the squad and adverse weather conditions). James was also a member of the under-21 side that season and sat on the bench for the first team in two fixtures, the first being at Heywood Road home of Sale Sharks, without getting on the pitch. However, being involved in the first team squad was an invaluable learning experience for the young second row. The 6ft, 7” lock finally made the big breakthrough in December 2003 when he was selected to partner Danny Grewcock in the second row for the 75-11 Parker Pen Challenge Cup rout of L’Aquila in Italy. Hudson capped a fine full debut by crashing over for one of Bath’s eleven tries as the club made the return leg a formality. James was selected for that second leg and later went on to appear in the home defeats of Leeds Tykes and London Irish.

Transferred To: London Irish and subsequently played for Newcastle Falcons and Gloucester Rugby.