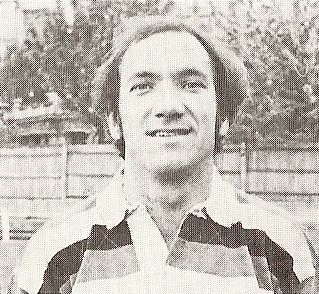 Achievements: Blue in the 1981 Varsity Match.

Derek Wyatt was born on December 4th, 1949, in London and learned his rugby at Westcliff County High School and Colchester Royal Grammar School. He captained Colchester and Eastern Counties Schools and won an England 19 group trial. He then went to St. Luke’s College, scoring eight tries on his debut for the Freshmen’s XV against Teignmouth, but because of the presence of Peter Knight and Graham Angell failed to win a regular first team place and gave up rugby for his final year when he was President of the Students’ Union. He then returned to his parent’s home in Midhurst, and played for Chichester and Sussex before taking a teaching post at Ipswich School. He joined the Ipswich Club, and scored a remarkable 72 tries in the season, and then in 1973-74 joined Bedford. He was their highest try scorer all five seasons and broke their scoring record twice, first by scoring 33 tries and then 35. He won regular International trials and was finally capped as a replacement against Scotland in 1976. He also toured Australia with England and played for an England XV against  the American Eagles, scoring five tries. He was in the Bedford side that won the John Player Cup and also played in the Eastern Counties side beaten by Gloucestershire in the County Championship final. He moved to the West Country as Head of History at Dauntsey’s School, West Lavington and joined Bath.