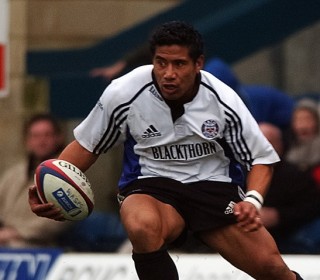 Popular winger Elvis Seveali’i was the major reason that Bath Rugby managed to stay in the Zurich Premiership in 2002/2003 with his haul of five tries in just nine appearances. The Samoan international signed for Bath in the latter part of that season from New Zealand’s Wellington Hurricanes and made a sensational debut. He came on for Scot Simon Danielli and wowed the crowds at the Recreation Ground by scoring a try with his first touch of the ball close to the end of the match. He failed to score in his next two appearances, including his full debut against Northampton Saints at home, but made up for that with a crucial try in the bottom of the table clash with London Irish (won 18-15). The Parker Pen Challenge Cup provided his final scores in the club colours with a brace at Vicarage Road against Saracens, followed by another important try in the return leg that saw Bath emerge victorious on try scored over the two legs. Elvis’ final game for Bath was in the Parker Pen Challenge Cup Final against London Wasps at Reading’s Madejski Stadium. The 12 times capped Samoan made his debut for his country in a victory over Japan, bursting onto the scene with four tries – a sign of things to come. Unfortunately due to the ‘foreign’ player restrictions in place at the start of 2003/2004 Seveali’i was forced to leave Bath and signed on for the newly created Welsh Super Club the Neath-Swansea Ospreys. Elvis also played for Sale, London Irish, Bourgoin and Rovigo. At the time of writing is Head Coach to the University of California’s Women’s Rugby team.