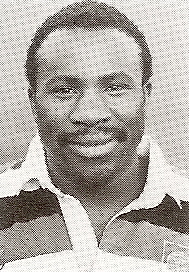 Represented England Schools and Students, England B and toured with England to Argentina. On the England B tour to New Zealand he was the victim of some untidy stamping and a badly torn ear put paid to the rest of the tour.

Played for Moseley and Richmond before joining Bath

Victor Ubogu was the quintessential Bath Rugby player combining hard work with flair and daring and forever securing a place in the hearts of the Bath Rugby faithful. An early representative of England Schools and England Students, Victor also won an Oxford Blue in the 1987 Varsity Match. He played his early club rugby with Moseley and Richmond before signing for Bath for whom he made his debut on the 28th September 1988 in a 22-6 away win at Clifton. Victor earned England ‘B’ honours while with Bath and went on the full England tour to Argentina in 1990. After switching to tight-head prop in 1991/1992 his career really took off and after an excellent season for Bath he won his first England cap in the autumn international win over Canada. He followed that up by playing in the 33-16 win over South Africa. His international career also included matches in the 1995 Rugby World Cup in South Africa, where he appeared against Western Samoa, Argentina, Australia, New Zealand and France. His final appearance for his country was as a replacement in the 1999 fixture with Australia. A true Bath legend, Victor ensured a place in Bath Rugby folklore with crucial tries in the 1997/1998 Heineken Cup run, including the winning try in the 20-14 semi final win over Pau. ‘Victor’s Corner’ thus became a watchword around the Rec. He retired from rugby union at the end of the 1999/2000 season with his farewell match being the 25-43 defeat away to Leicester Tigers, his 245th game for Bath. His last appearance at the Rec. was more of a cause for celebration though as Bath took apart Saracens 40-27. After his retirement Victor concentrated on building up his burgeoning business empire Vu Limited organising Corporate Hospitality.