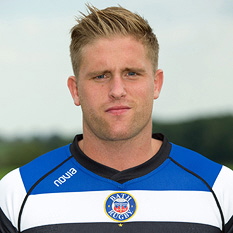 The Poole born centre joined the Bath Rugby Academy in the summer of 2007 straight from finishing his A-levels at Bryanston School. He went on to sign a full professional contract with the Club in 2008.

A big, powerful ball carrying player, who can play at either inside or outside centre, Ben made his debut for the 1st XV against Saracens in the LV Cup on the 8th November, 2009, with his Premiership debut coming two weeks later against Worcester Warriors.

Ben received international honours at an early age representing England at U16s and U18s level and touring Australia with the latter.

Retired in July 2015 due to long term shoulder problems.