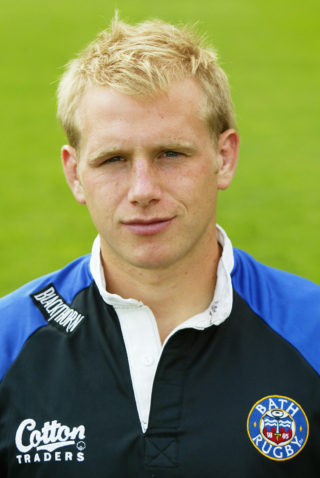 James Scaysbrook preferred the open side flanker position, but was equally at home playing on the other side of the pack. He was born on 1st January 1982 in Birmingham and appeared for Bath United in their truncated campaign in 2000/2001, scoring a try in the 44pts-10pts win over Exeter. James played representative rugby for England Under-19’s that season against France and Wales (both narrow defeats) culminating in a call up for the FIRA Under-19 World Cup that was held in Chile. Standing at 6 feet 2ins and weighing in at 14 stones, James’ mobility saw him selected for the England Under-21 set-up in 2001/2002 adding to his England Under-18 and Under-19 honours. He made his 1st XV debut as a replacement for Mark Gabey in a 20pts-17pts defeat of Sale at the Rec. in October 2001, and was quickly inserted into the line-up starting a league match for the first time on the 11th November when London Irish were beaten 19pts-11pts. James performed admirably throughout the 2001/2002 season in a side decimated by injuries, culminating in him being awarded the honour of being voted Bath Rugby Young Player of the Year for 2001/2002 season at the Club’s Annual Awards Dinner in May 2002. The following two years saw James consolidate his place in the first team squad, being used mainly as a replacement in the second half of matches adding a touch of dynamism to the back row whenever called upon due to his excellent mobility in the loose and his ability to pilfer ball on the ground. James scored his first try for Bath in the 40pts-3pts away win over Parma in the 2002/2003 Parker Pen Challenge Cup and added a further brace that year – repeating the feat the following campaign when he crossed for three more tries.

Signed From: Moseley and transferred to Exeter from Bath.Is now a coach and is an Assistant Coach with England U20s.