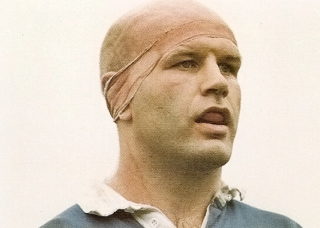 A former England Colt, he learnt his rugby at Weston Super Mare. He was a surprise Bath selection for the 1984 Cup Final as Ronnie Hakin had performed superbly throughout the season.

A Member of the 1991/92 England squad which included the World Cup when he played against Italy and USA.

Made his international debut in Australia in 1984.

A superb line out specialist and most athletic forward with a soft pair of hands.

Nigel Redman joined Bath Rugby from Weston-Super-Mare after winning England Colts caps and was controversially selected for Bath’s first John Player Cup Final against Bristol in May 1984 at the age of 19 and capped a remarkable rise to prominence by winning his first senior cap against Australia later that year. His Bath Rugby debut came on the 1st October 1983 in a 16-25 loss to Aberavon. The talented lock forward was included in the England squad for the inaugural Rugby World Cup in 1987, playing in matches against Australia, Japan and Wales. Four years later he was back playing in the World Cup again this time featuring in games against Italy and the Unites States. ‘Ollie’ as he was affectionately known around the Rec. had a stand out year in 1994 claiming a place in the full England squad, touring South Africa, and being named as the Rugby Football Union Player of the Year. With Martin Haag, he became the mainstay of the Bath second row as both players straddled the amateur-professional divide. Appointed as assistant coach at the club in February 1997, his career as a player did not wane and he made 22 appearances in the first full professional season, crossing for three tries. During the summer of 1997 he toured Argentina with England and received the surprise of his life when informed that the British Lions management had requested he join up with the squad in South Africa following the injury sustained by Scotland’s Doddie Weir. He played in four matches and even captained the midweek team in the match versus Free State. The following campaign saw Nigel as a virtual ever present, for his club playing in 31 matches and crossing for a sole try against Richmond (his last score for the club). He completed a remarkable tally of 349 games for Bath with a final appearance in the 1998/1999 season against the Newcastle Falcons in the National Cup. He left the club that summer to take over the Director of Rugby position at ambitious Basingstoke, but will forever be remembered as a true Bath Rugby great.

Following his retirement from playing he turned to coaching and was the Elite Coach Development Manager at the RFU for a number of years. In 2014 he was appointed as Elite Coach by British Swimming who described him as “the outstanding candidate.”