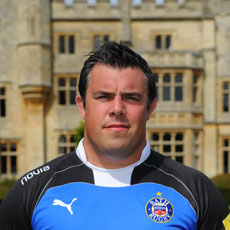 After protracted negotiations and a failed attempt to sign him a season earlier, Duncan finally made the move to Bath Rugby in time for the start of season 2003/2004. The former Pontypridd prop forward (he won a Principality Cup winner’s medal and Parker Pen Shield runner’s up medal there) gained England ‘A’ honours and was selected as a full tourist on the infamous 1998 ‘tour to hell’ when England travelled to Australia, New Zealand and South Africa, playing forty minutes in the midweek team before suffering an a/c joint injury that forced him home. However, since then because he was uncapped he attracted the attention of the selectors from Scotland and Wales as well. Previously with Sale, Fylde (on loan), Harlequins and Ebbw Vale, Duncan made his long awaited Bath Rugby debut in the pre-season match with the Celtic Warriors at his previous hunting ground of Sardis Road. His competitive debut came a week later as Bath Rugby made the perfect start to the 2003/2004 campaign with a bonus point win at Headingley against Leeds Tykes, but he had to wait until the 21st March to get on the score sheet, nailing a crucial try in the narrow 21-20 victory over London Irish at the Madejski Stadium. Duncan’s Bath Rugby career could have happened a lot sooner though as he played for Bath Juniors from the age of nine after being raised in the City, before leaving to study at University.

A technically sound tighthead prop forward. He also had a nose for the tryline, scoring eight tries in his time at the Club.

Duncan played for England A in 2005 and went on to play in the RBS Six Nations that year, as well as touring Australia with England in the summer. He was also part of the England Saxons squad who won the 2010 Churchill Cup.

Bath Rugby announced on 16 April 2012 that Duncan Bell would retire from the game at the end of the season. In fact he joined Newport Gwent Dragons and subsequently Lydney RFC.

A firm favourite amongst the Bath Rugby supporters Duncan made over 200 appearances in his time with the Club, having joined from Pontypridd in 2003. .

Speaking about the decision to retire Duncan said: “I have had a fantastic career, from starting out at Quins through to the last nine years here with Bath. I began playing rugby for Bath Minis, so to have had such a long career here has been amazing and it’s been an honour to run out in the Bath shirt over 200 times”.

“I’d like to thank all the players, coaches and staff I’ve worked with over the years, and also the supporters who supported me throughout my career. It’s been a difficult decision to make, but I’m looking forward to the new challenges that await, primarily with my business Bell Financial Services.”

Nick Blofeld, Bath Rugby Chief Executive, added: “Belly has been a great servant to Bath Rugby throughout his time here, and has always been a larger than life character to have around; it is no surprise he became a real crowd favourite. We would like to thank him for all his time with the Club and wish him the best of luck for the future.”

Duncan has also announced that he has been bravely battling with depression for some time.

Talking about this, RPA CEO, Damian Hopley, said: “On behalf of all of our RPA members I would like to commend and congratulate Duncan Bell, not only on his outstanding rugby career, but also on his extremely brave decision to address the issue of depression as he retires from the game in order to help his peers who may be facing similar challenges in their lives.

“Duncan is widely respected as one of the most talented and enduring players in the Bath squad, with excellent footballing skills that deservedly earned him full England honours, and his humble and approachable nature have made him one of the most popular players ever to have played for club or country.

“To the outside world, Duncan has always appeared the most upbeat of characters, rarely without a smile on his face and always one to make or take a joke. Privately, Duncan has had some considerable challenges in his life and I cannot speak highly enough of the courage he is now showing to speak openly about the depression he has suffered from over the past few years.”

“We know how uncomfortable Duncan has found it to openly discuss this illness, which until recently has been seen as a taboo subject in professional sport and it is to his tremendous credit he is confronting this head on. The fact that someone as popular and as well-known as Duncan is coming forward to speak about his personal struggle will help to raise awareness of the issue and will reassure others who may be suffering in silence”.

After retirement Duncan took up coaching and spent a few seasons as Director of Rugby at Lydney RFC.

Now a Citing Officer in the Premiership.