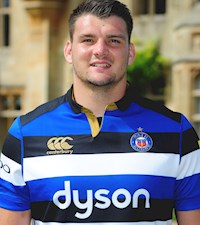 At 6’5″ and 120kg, back-rower Sisi has tremendous physical presence, and proved at international age group level that he is also a good reader of the game with excellent ball skills. He was up against a powerful back-row contingent at Bath, and was expected to learn a huge amount from the likes of Springbok Francois Louw.

A mainstay at England U20 level with whom he won both the U20 Six Nations and Junior World Championship titles in 2013 David Sisi joined Bath Rugby from London Irish for the 2013/14 season.

Born at the British Military Hospital of Rinteln in Germany, Sisi is an abrasive, direct runner with a high work rate

David spent the 2015/16 season on loan to London Irish but subsequently played for Yorkshire Carnegie, London Scottish and joined Zebre at the beginning of the 2017 season. He has now been capped by Italy making playing in the Six Nations and the 2019 World Cup in Japan.