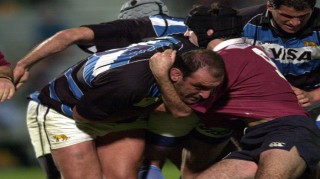 Argentinean international German Llanes was one of Bath Rugby’s first major signings in the professional era, joining the club a few months into the 1996/1997 season, shortly after compatriot Federico Mendez had signed on the dotted line. The tall second row, who was a particularly fine lineout jumper, made his first appearance for Bath Rugby in the mid-season friendly match with the touring Super-12 side, the Otago Highlanders from New Zealand. Llanes lined up alongside Brian Cusack in the second row that day, one of three partners he had at lock that season. Limited initially to appearances in friendly matches, a first try against the Army prompted a re-think by the Bath management and Llanes was duly included in the league side from the start for the first time in a 25pts-25pts draw with London Wasps. He kept his place for the remaining last five matches of the season, crossing for a second score in the record 84pts-7pts league defeat of Sale. Injury intervened in the 1997/1998 season and coupled with an alarming lack of form saw the former Club de la Plata player make only ten appearances in, what was for him, a truncated campaign. His final game for the club was the 24pts-23pts win over London Scottish in the Tetley’s Bitter Cup. Capped 43 times by Argentina, Llanes was nicknamed ‘Bighead’ due to his massive neck and head. Upon the completion of his two-year contract, he moved to Italian side Lian and from there went on to represent La Rochelle in Western France as well as enjoying a spell with Milan.