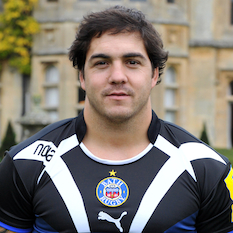 Equally adept playing on the wing or at fullback, Horacio has been capped 63 times by his country and will prove an excellent addition to the back line with a great attitude and physicality as well as a nose for the try line. He will join up with the squad as soon as he has received his visa to play in the UK.

Agulla, who played 47 times for the Leicester Tigers scoring 40 points, has endeared himself to the Aviva Premiership crowds over the last few seasons.  His commitment and determination as well as his bulldozing runs led to him winning the 2011/12 Tigers fans Player of the Season and Try of the Season awards.

An intelligent and powerful player with great footwork and pace, Agulla made his international debut in 2005 against Samoa and represented his country at the 2007, 2011 and 2015 Rugby World Cups, with the Puma’s finishing third in 2007.

In 2012/13 Bath Rugby Head Coach, Gary Gold said “We’re really excited to have Horacio join Bath Rugby for the new season and are looking forward to him getting stuck into training with the rest of the squad.  He’s a very good player who is able to play two positions at a high level which brings great diversity and strength in depth to the team.  We believe his exposure playing for Argentina in the new Rugby Championship format against the All Blacks, South Africa and Australia will further develop him as a player and Bath Rugby can only benefit from that.”

Upon arriving at Bath, Agulla wasted no time in demonstrating his exceptional workrate, physicality and defensive abilities beyond his stature.

Agulla proved himself time and again on the world stage, scoring a try on his international debut in 2005

Moved from Bath to Castres Olympique and from there to Jaguares in Argentina. He previously hade spells at Hindu Club, US Dax, and Brive.