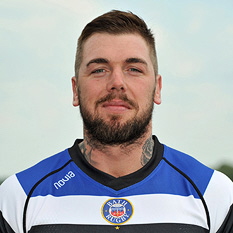 Ryan Caldwell joined Bath Rugby in the summer of 2011 from Ulster Rugby.

Having joined Ulster on a development contract in 2003, Ryan made his debut in October 2005, and went on to make 79 appearances for the Irish province.

Ryan was a strong lineout operator, who was also powerful in the scrum and extremely effective and mobile in the loose.

The strong skill set he developed saw him win two senior caps on Ireland’s summer tour to the USA and Canada in 2009, having previously participated in two U21 Rugby World Cups and the Churchill Cup with Ireland A.

Departed Bath in 2014 to join Exeter Chiefs on a one year contract.