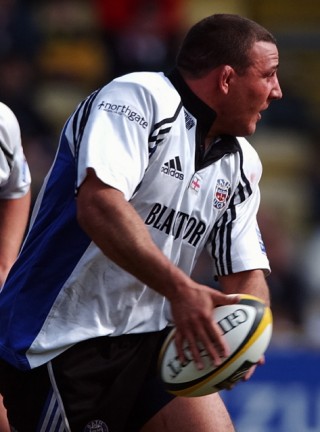 Poole-born Andy Long initially made an impact at the club playing as a flanker. Indeed, it was from this position that he made his club debut in a 26-16 win over the Army in March 1996. He followed that up by making a league debut in the same position as a replacement for Richard Webster in the rout of Sale a month later. It’s testimony to his loyalty to the club that Andy Long stuck with Bath Rugby for as long has he did, making as many appearances as a replacement as he did as a starter. The reason for so many substitute appearances is probably due to his ability to cover the hooker and flanker role, a priceless asset from any player. Andy spent the majority of his time at the club as an understudy to Mark Regan, and yet whenever he was called upon he never let the club down. Being the right size for a flanker as well meant that his ability in the loose and his pace and mobility around the field far out-weighed those of his contemporary and yet Andy was overlooked for so many matches. Originally with Bournemouth, Andy was thrust into the limelight when he was selected for England’s Cook Cup encounter with Australia at Twickenham in the autumn of 1997 as an untried youngster. Nerves seemed to get the better of him that day and by his own admission he did not play to the best of his abilities. His patience was rewarded though with a second cap four years later on the summer 2001 tour to North America as he came on as a replacement in the one-off test match with the US Eagles in San Francisco. Andy eventually left Bath at the conclusion of the 2002/2003 season, signing for Irish Province Munster, before going on to represent Rotherham Titans and Newcastle Falcons, for whom he signed in the summer of 2004.