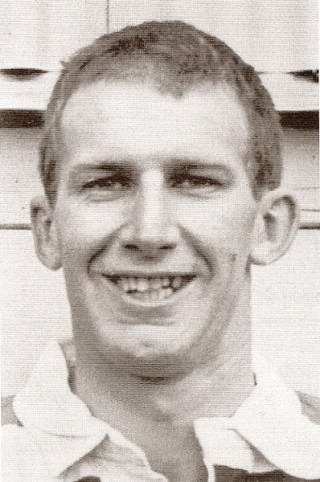 Career details: Was a hugely popular House Master at Monkton Combe School where he taught History.

Peter enjoyed the running rugby style at Oxford University (1955-59) where he captained the Greyhounds and played some 30 times without gaining a ‘blue’. He also played against the Australia XV whilst at Oxford.

From 1959-65 he played for Blackheath, Oxfordshire (captain), Sussex and Dorset and Wilts, including selection for Southern Counties v All Blacks and Springboks, before his one appearance for Somerset during his time at Bath.

Peter ended a three season term of captaincy on a high note. He had been an inspiration in introducing a running style of rugby which contrasted with the 10 man rugby which had characterised many of Bath’s matches in previous seasons. At that time, with 645 points, his was the highest scoring Bath side in Club history. Although the statistics were to be surpassed in later years, his term marked a significant upturn in Bath Club performances. However, he was not exceed the record number of 27 wins in a season, achieved by Alec Lewis’s sides in the 1950-51 season.