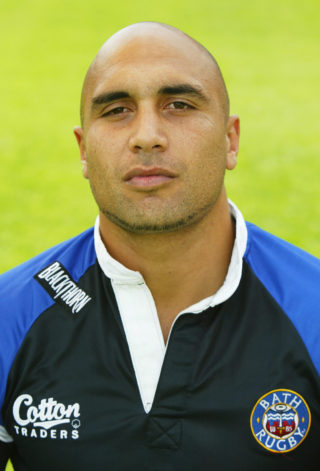 Flying wing Brendon Daniel made a stunning start to his Bath Rugby career as he grabbed a hat trick of tries in the pre-season victory over the Celtic Warriors at Sardis Road, Pontypridd. This came as no surprise as the former Bristol Shoguns winger had already scored 38 tries in 81 Zurich Premiership matches prior to joining Bath Rugby – an excellent return. The early season promise continued as Brendon claimed a try in the first league match at Leeds, following that up with scores against Sale Sharks and a brace at London Wasps, before injury curtailed his explosive start, restricting him to only six appearances all term. Daniel was Bristol’s leading try scorer in the 2002/2003 season when he crossed for nine in fifteen matches despite their relegation and was on course to break that strike rate at Bath before injury intervened and put him out of action. He began his rugby career in his native New Zealand earning recognition and honours for New Zealand under-19, New Zealand Academy and the All Blacks Sevens side, before chancing his luck in Europe with Saracens (where he played in the 1998 Powergen Cup winning side), latterly taking in spells at Coventry and Harlequins (losing finalist in the 2001 Powergen Cup Final).