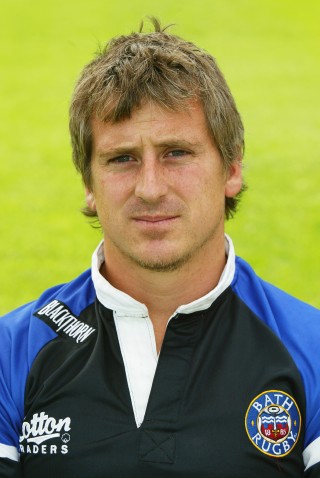 The 31-times capped South African centre Robbie Fleck arrived at the Recreation Ground amidst much publicity in October 2003 just as the Rugby World Cup was reaching the finals stages. Indeed, Fleck could have been in Australia, yet was overlooked by the South African coaches for the tournament. Fleck joined Bath Rugby from Western Province where in a 47-cap career he managed twelve tries, debuting in the 1997 Currie Cup winning side. He then featured prominently in the back-to-back 2000 and 2001 successes. The 6ft, 14st 7lb Fleck was born in Cape Town and studied Social Sciences at the University of Cape Town and made his full Springbok debut in 1999 against Italy. His first try for his country came in that debut match at Port Elizabeth and he has since taken his international try tally to ten. Robbie also holds the dubious privilege of being the first Springbok to be yellow-carded in June 2000. Fleck’s Bath Rugby debut was in the 31-17 home win over Leicester Tigers in November 2003 and he featured a week later in the 20-14 win at Gloucester. Unfortunately, during the match he suffered a broken leg that was to keep him out of action for the best part of sixteen weeks. However, it was all a far cry from his early days as a pizza delivery boy! After a battle to regain fitness, Robbie worked his way back into the starting XV and celebrated with a first try for the club, a superb solo effort against NEC Harlequins at the Stoop Memorial Ground in front of the live Sky Sports TV cameras.