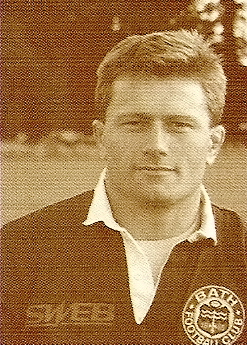 Educated at Tavistock, Devon. Is one of rugby’s most travelled senior players, making a journey from his farm it Milton Abbot on the Devon/Cornwall border to the Recreation Ground twice a week – a round trip of 300 miles. He was 26 before he began playing first class rugby, joining Bath in 1985.

Played county rugby for Cornwall and coached the 2015-16 team to winning the County Championship.

Graham was awarded 5 England caps and played in the World Cup against Australia. Was vying for the position of hooker with Brian Moore. Many rated him a better all-round player than Moore who should have been capped more times.

Has coached Barbarians RFC, The Royal Navy, Penzance Pirates and Plymouth Albion RFC. for whom who was still playing in the 2015/6 season.

A Bath Rugby stalwart for many years, Graham Dawe transferred to Sale at the end of the 1996/1997 season having run out in the Blue, White and Black on 245 occasions – a phenomenal feat. Born in Plymouth, the Cornish farmer, who was famed for his long journeys to the Rec. for both training and matches, switched to the Sharks when it became evident that he could no longer command a regular place in the Bath Rugby line up. Signed from Launceston (where he was Captain), the likeable hooker started a ten-year affiliation with the club when he made his debut in a 6-29 defeat at the hands of London Welsh at Old Deer Park on the 11th January 1986. Prior to the professional era, Dawe crossed for twenty-three tries, failing to add to the tally when the game went ‘open’. After a successful spell with Sale, Graham returned to his native Cornwall and played for Plymouth Albion, where he later became head coach. Dawe was capped five times by England (regularly sitting on the bench as cover for Brian Moore) and played twelve times for the Barbarians, crossing for two tries. Graham was also a proud try scorer in the 1990 Pilkington Cup Final demolition of Gloucester. He won five caps for England, with the first four coming in 1987 after a debut in the defeat at Lansdowne Road to Ireland. When he re-appeared in national colours during the 1995 World Cup fixture with Western Samoa it was his first outing for England since the World Cup clash with the USA in Sydney in 1987. Graham also represented England ‘A’ and England ‘B’, and made his county debut for Cornwall in a fixture with the Barbarians. Graham later captained Devon to the County Championship in 2004 with a victory at Twickenham prior to the 2004 Zurich Championship Final.

Graham’s son played for England U20’s in the 2017 World Cup Final and is currently with Bristol Rugby.

Also Played For: Plymouth Albion where he was still appearing in the front row in the season 2015/6 and Launceston RFC