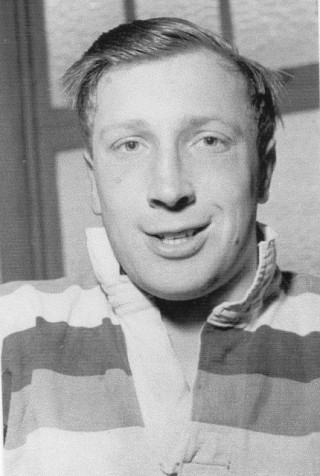 John began playing rugby at 12 years of age at Daventry Grammar School. At 13 he joined a local junior club and represented Northamptonshire and East Midlands at schoolboy level.

In his career he represented The Army, the Civil Service XV, Hampshire, Bath, Moseley and Northampton Saints. Whilst at Bath as a goal kicker, he was known as an innovator being one of the first kickers to dispense with the old style toe-ended kicks at goal and introducing the then revolutionary “round the corner” style

John was at Bath from February 1961 for 3 seasons, captaining the club on 38 occasions in the absence of injured Club Captain Laurie Rimmer. John had the honour of being President of Orkney Rugby Club for 3 years between 2009 and 2012.

On moving to Orkney, due to work commitments with Ordnance Survey , he ended his playing days there and only retired from the 1st team at the age of 45.  The photo shows John scoring a try in a Vets game in Orkney well into his sixties.