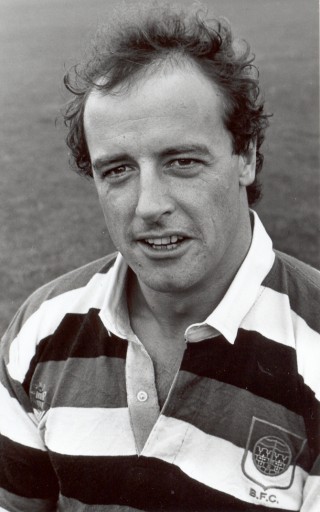 Achievements: Past President of Bath Rugby.

He was an avid tourist with an attractive and gregarious personality. He toured Argentina, America, South Africa, Romania and  to numerous rugby pleasure spots associated with Seven-a-Side and World Classics rugby.

At his peak, he was a blisteringly fast winger and athlete, having been National 100 and 200 metres champion in his schooldays.

He gained England U16 and U19 Group caps from Bryanston School, represented England Students and England  U23s, before the award of the first of his two England caps in 1983.

David always had a rapport with the ‘Flowerpots ’and consequently was very much a ‘Rec.’ favourite: If he was not ‘getting much ball,’ he would stick his hands in his pockets and chat with touchline supporters.

On 9/7/1981 one newspaper carried the rumour that David Trick was contemplating quitting the UK and starting a new life in America.

It was reported that he had signed a contract to promote sportswear in the States, South America and Africa and was leaving for New York on the Monday!

During his career Trick was chased by Rugby League clubs, including receiving a substantial offer from Oldham seeking his signature-an offer he refused.