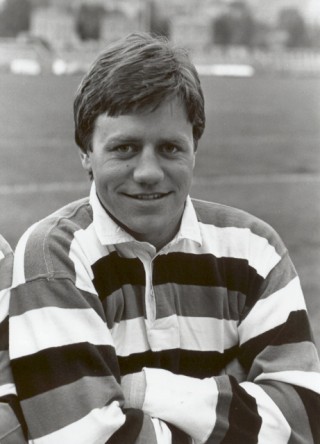 His rugby career was interrupted by a severe leg injury suffered when playing for Somerset v Middlesex in the County Championship 1983. It was to be a long road back to playing fitness and it was greatly to his credit that he was able to return to Bath’s premier side and impress the England selectors.

Halliday was tough and uncompromising on the field, but a popular and articulate gentleman off it. One of Bath’s ‘party tricks’ was for Richard Hill to miss out his inside centre and find ‘Hallers’ on the angle – at speed – 10 to 15 yards from the opposition line, thus enabling him to score many of his 63 tries.

Adept at playing inside or outside centre, formed a truly exquisite centre partnership with Jeremy Guscott. A strong ball carrier and great hands.

Halliday played on the wing as a losing finalist in the 1991 World Cup. The back division was comprised of Richard Hill, Rob Andrew, Rory Underwood, Jeremy Guscott, Will Carling, Simon Halliday, and Jonathan Webb. England lost 6-12 to Australia. However, he had the consolation of participating in England’s Grand Slam in 1992.

He played 23 times for England – 16 caps with Bath and 7 with Harlequins.