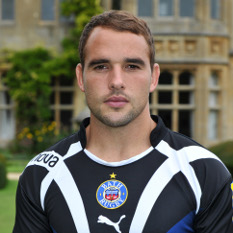 After one season with rivals Gloucester, Olly Barkley returned to Bath Rugby at the end of the 2008/09 campaign.

The prolific Barkley became a firm favourite during his initial eight-year spell at Bath, scoring 1,697 points in 180 matches and earning a reputation as one of the finest playmakers in the Guinness Premiership. Since returning to the Club, his points tally had risen to just under 2000 points by the end of the 2010/11 season.

Capped by England before he had made his senior debut for Bath, Barkley  won 23 caps for his country, playing at both Fly-half and Inside Centre.

When at London Welsh he played latterly as a player coach. Since 2016 he has joined with James Scaysbrook and is coaching in the Kowloon Hong Kong Premiership.

Founder of Elektrik Events and The National Association for Children of Alcoholics.