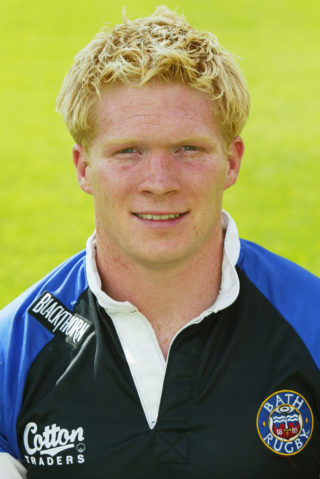 England under 21 centre Alex Crockett made his first team debut for the club in the 9-48 drubbing that the Leicester Tigers handed out to Bath Rugby in September 2001 at Welford Road. Crockett, who had an exceptional under 21 Six Nations tournament in 2002 scoring three tries in four games, came on as a second half replacement for Sam Cox and acquitted himself well in a side that was on the back foot. Considering the team was down to fourteen men at the time, due to John Mallett’s sending off, Alex’s work in defence was doubled and it’s to the eternal credit of not just the youngster, but also the whole team, that they did not buckle in the face of concerted Tigers pressure. Signed from the Bath Rugby Academy, Alex was schooled at the famous Colston’s Collegiate in Bristol and was a member of their successful Daily Mail School’s Cup winning side. His promise was noted when scoring in six successive matches for the United XV in 2001/2002 in their truncated season, and he duly went on to make a total of nine appearances in the first XV, making four starts and five as a replacement. Alex also crossed for a brace of tries in the Adedayo Adebayo and Phil de Glanville testimonial match at the end of 2000/2001 to put his marker down and his stature has risen with every game since, culminating in his most successful season to date in 2003/2004 where Alex made 22 appearances and scored seven tries.