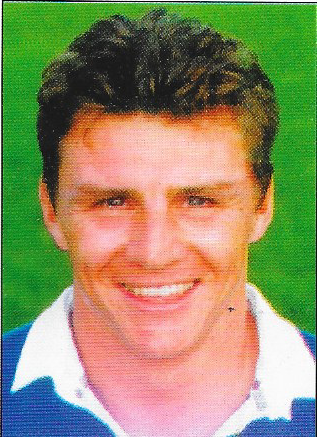 Bath Rugby have been blessed with some exceptional wingers over the years, with the likes of Tony Swift and David Trick regular try scorers during their time with the club. In the mid-nineties though, the golden boy of the Recreation Ground faithful was Jon Sleightholme. Snapped up from Yorkshire side Wakefield in the summer of 1994 after starring for Hull Ionians, Sleightholme became a regular name on the try-scoring list at Bath. After studying Sports Science and Physical Education at Chester College, he became a postgraduate student in the School of Education at Bath University, where among other things he studied Physical Education, with a view to becoming a teacher on graduating. He made his Bath Rugby debut in the 32pts-13pts win at Orrell in September 1994 and was soon off the mark, ending the season with 13 tries in 23 appearances. His sheer pace was a delight to watch and with a further 14 tries in 24 matches in 1996/1997 it was no surprise when he was selected for England. Having been a regular for England under-19s and England under-21s he also represented England Students and the Emerging England XV with distinction. He made his England ‘A’ debut in 1994/1995 against Ireland ‘A’ and followed that by scoring tries in successive matches with France ‘A’ and Italy ‘A’. With a pedigree such as that it was little surprise when he was rushed into the senior side making his full debut against France in Paris. Four tries in twelve matches for the Red Rose followed, but despite his burgeoning reputation (which included the lead vocals on Bath Rugby’s own song – don’t ask for those who can’t remember!) Sleightholme struggled in 1997/1998 and in a further eight matches crossed only once, against Bristol in a 44pts-15pts win. He left the club that year to join Northampton Saints. Despite the lack of tries in his final year at Bath, Jon is rightly recognised as one of the most prolific finishers in the game, as seven scores in eight Barbarians matches testifies.

Signed From: Wakefield (had also played for Grimsby and Hull Ionians RFC’s.