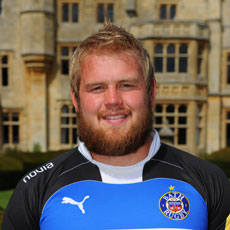 The son of Chris Lilley who also played for the club.

Mark Lilley is another successful product of the Bath Rugby Academy, and made his 1st XV debut from the bench in October 2009 against Saracens.

Equally strong on either side of the scrum (which may have acted against him) Mark is effective both at scrum time and around the park, and is a hard-working young member of the squad. He made his first start for the Club in May 2011 in the victory over Newcastle at the Recreation Ground.

He has also represented both Somerset and England, at U18s and U20s level respectively.

Transferred to Bristol. Now coaches Bath University XV and the Bath Academy. Is likely to be appointed to coaching the Premiership teams.