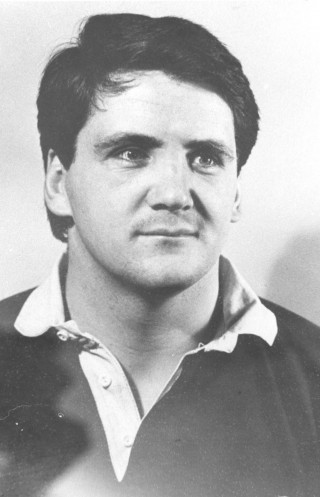 A skilful ball handler with dynamism and pace when driving forward David was mobile around the park and had a  superb scrummaging technique. He was a prototype player of the 1990’s who led from the front and was recognised as Captain Courageous.

Born in Aylesbury 8th May 1962 he lived in Hemel Hempstead until 8 years old. Father Tommy was a Chartered Surveyor who  moved the family  to a house in Glenbuchat, Aberdeenshire where David  could roam in 16,00 acres of the estate.

Schooled at Blairmore he was introduced to playing  loose head by Colonel Callard.  He attended Exeter University alongside his captain, a certain Richard Hill.  Due to that connection he joined Bath and came under the guidance of Jack Rowell and Dave Robson.

The Bath and Edinburgh Academicals prop is best remembered for walking his team on to the pitch before beating England to snatch a Grand Slam in 1990. Sole played 44 Tests for Scotland, 25 as captain, and won three caps for the victorious Lions in Australia in 1989. Now a management consultant, he captained the Lions, the Barbarians and a World XV that beat New Zealand in 1992.

For a job whilst at Bath he worked for Malcolm Pearce as a farm labourer, mucking out the byres and bedding down the cattle;then took up a milk round, collecting milk and delivering it to the dairy.

Coached by Ian McGeechan, played golf with Nick Faldo and had an audience with Prime Minister Margaret Thatcher