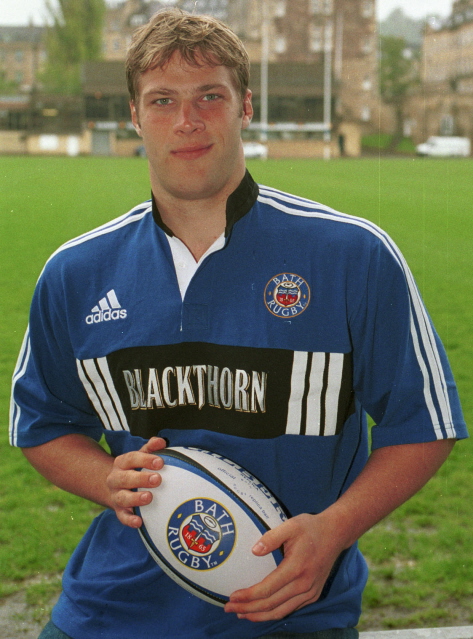 An integral member of the squad both on and off the field, he was fearsomely committed during games. His ball-carrying skills and lineout work were very impressive and his physical presence in defence often saw the opposition ending up second best in any confrontation.

Retired due to an ankle injury sustained in January 2012

Versatile back row forward Andy Beattie signed for Bath Rugby after impressing in the National League for the Exeter Chiefs, after a brief spell at Richmond. Andy, very much recognised as a player for the future when Jon Callard snapped him up, was plunged into first team action earlier than expected due to the injury crisis that the club suffered at the start of season 2001/2002. Andy made his debut for the club in the 6-10 defeat at Leeds in September 2001 at flanker but over the course of the year found chances limited, due to returning players and an injury of his own,. The affable number eight made eleven appearances (but only six starts).  He showed his adaptability during that campaign by turning out at lock, flanker and at number eight – his preferred position.  Season 2002/2003 saw a major breakthrough for Andy as he became a regular in the Bath back row, playing 34 times for the club and recording a maiden try, ironically from the lock forward position in the 40-3 victory away to Parma in the Parker Pen Challenge Cup. He continued to improve throughout the 2003/2004 season, playing a further 31 times and claiming five tries as Bath pushed towards the Championship and was rewarded for his excellence with selection for the England ‘A’ tour to Canada and the USA. Unfortunately injury meant that ‘Beastie’ was forced to sit out the tour, and thus put a dampener on an otherwise magnificent twelve months for the flanker. Formerly with Exeter University, prior to signing for the Exeter Chiefs. Andy was a member of what was England’s best 18 Group side with Balshaw, Tindall, Wilkinson, Sheridan and Borthwick. Andy was captain of the side that was crowned BUSA (British Universities) Rugby Champions in 2001.

Retired due to injuries.