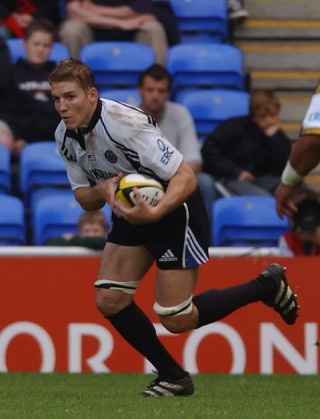 Former US Eagles Captain Dan Lyle first appeared in a Bath first team shirt as a replacement in the 76pts-7pts victory over local rivals Bristol in October 1996, having signed for Bath from Old Mission Beach Athletic Club (OMBAC) in San Diego. Lyle, who captained Bath in 2001/2002, went on to make over 125 appearances for the club and in seven seasons had scored twenty-four tries. Born in Louisville, Kentucky and educated at Woodward Academy and Virginia Military Institute, Dan previously had a spell with the American Football Gridiron team the Washington Redskins. Deciding that rugby was the game for him, Dan switched codes and made his United States debut in 1994 against Ireland, going on to win 45 caps. He toured England with the Eagles in 1996/1997 as captain and was touted as an inspirational signing when Bath snapped him up for the start of the 1996/1997 season. During his spell with Bath he has filled in at lock, flanker and his preferred position of No.8. In fact, it was as a lock forward that Bath purchased him in 1996, but since then he has made the pivotal back of the scrum role his own. Renowned for his ability in claiming re-starts and lineout ball from the back of the line, Dan was a major source of possession for the club. Scored a crucial try against Pontypridd on the way to the 1998 Heineken Cup Final with Brive and anchored the scrum in that memorable defence of the line midway through the second half that turned the momentum of the match Bath’s way. Always reliable when called upon, an injury in the 2002/2003 campaign (his final one for the club) curtailed his appearances, but it was still a major shock when the likeable American announced he was to join Leicester Tigers for the following season. His time at Welford Road was brief however, and Dan retired from playing the game midway through the 2003/2004 season to take up a coaching post with the United Stated National team for whom he appeared with distinction on 45 occasions. Has also had the honour of being selected in the Barbarians representative side on two occasions, against the Combined Services, scoring two tries in a 40-33 victory, and Ireland.

When he retired from playing he eventually became the Tournament Director for USA 7’s from 2006 to 2016.