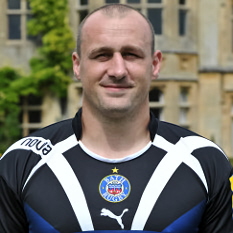 Carl joined Bath from Sale Sharks where he made 37 appearances and made an instant impression as a powerful and determined player. For whatever reason he left the Club in the 2015/6 season to join Lyon Olympique Universitaire who play in the French Top 14. Carl has proved an enormous success at this club despite suffering an injury (knee reconstruction) which kept him out of the game for approximately a year. A loss to England international rugby because his residency in France has precluded a selection for England XV’s.