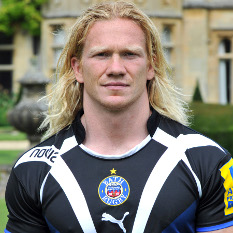 Tom Biggs arrived at Bath Rugby in 2010, having arrived from Newcastle Falcons. His blistering pace and strength caught the eye of many in his first season, as he became one of the Club’s highest try scorers in 2010/11. In 25 appearances for the Club, he scored 11 tries, including two against Biarritz in France and a hat-trick against London Wasps at Twickenham.,

Tom  initially played football as a youth at Hull City and first played rugby for Yorkshire U18s.  He started his professional career at Leeds Carnegie, where he became the all-time top try scorer for the Yorkshire club.

The experienced winger has also gained international honours, representing England U21’s in his debut season at Leeds. In 2008 he was involved in the England Sevens setup, before playing for England Saxons against the USA in the Churchill Cup.