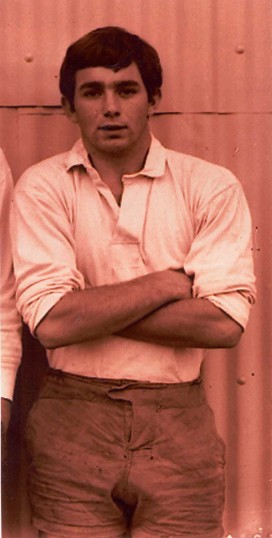 The Perry family moved to Bath in 1958.  When at Oldfield Boys school (1960-1965), he represented  a Bath Boys XV. A talented all rounder  he won a sport’s scholarship to Millfield, converting from Fly-half to Open-side wing forward. He was privileged to play alongside such budding luminaries as Gareth Edwards, J P R Williams and Vaughan Williams (later Bath). Upon leaving school in 1967, he joined Oldfield Old Boys RFC and a year later was asked to join the Bath club. He played 20 games for the 1st XV, as back-up for openside wing forward Phil Hall, but due to his lack of weight and height, it was suggested that he move to outside the scrum. He played a full season at centre before another change of position – this time as scrum-half to partner John Horton for Club and County. During a season of captaincy (1974-75), he played the majority of games at Fly Half.  Chris also captained Bath Spartans between 1979-1982. From 1982 to 1992  he was assistant Fixture Secretary for the Spartans and Youth XV’s.

Chris played cricket for Bath 1st XI at 15, also Lansdown, and Imperial, and for Somerset at Under 15, 19, 25 and 2nd XI levels.He also turned out for Gloucestershire 2nd XI as opening batsman. It was his prowess at cricket, which led to the scholarship at Millfield, where he opened the batting for three seasons. He also captained the school Football 1st XI and represented Somerset Schoolboys.