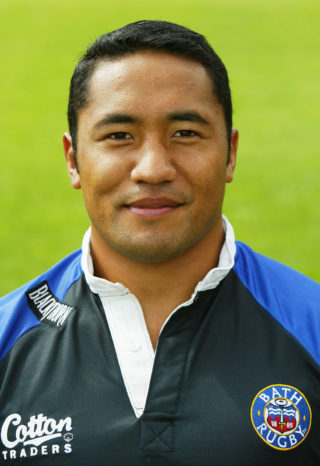 Final game: 2008 when he announced his retirement and took up a Rugby coaching position at Bishop Vesey’s Grammar School in Birmingham.

The Samoan international, he has nine caps for his country, signed for Bath Rugby in time for the 2003/2004 season making his competitive debut against his former club, Leeds Tykes, in the 44-32 opening day victory, going on to play in 31 matches that season. It was the perfect league debut for Isaac as he capped his return to his former club with a well-taken try. The 6ft 2” number eight attracted a cult following early at the Recreation Ground, particularly after his block busting try against Leicester Tigers where he stampeded a la Jonah Lomu over the hapless wing Steve Booth! The first time Bath supporters got to see Fea’unati was in the pre-season clash at Sardis Road against Celtic Warriors and he impressed thereon in. Isaac was a member of the Samoan World Cup party that played on these shores in the 1999 Rugby World Cup, appearing as a replacement in the game against Argentina. It was somewhat of a surprise return to international colours for Isaac during the 1999 RWC as his international debut had been three years earlier in a match with Ireland. His club rugby career began in his home town of Wellington, where he ran out for Marist St Pats and the Wellington NPC side, before a move to the United Kingdom saw stints with Melrose (Scotland) and Rotherham. Isaac enjoyed a terrific spell at London Irish before he joined the Tykes for the debut season in the Zurich Premiership.