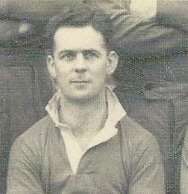 Jack announced his retirement from playing on the 1st November 1948, but he was to fill in on a number of games after this date.

He retired from playing at the age of 35.

Eddie Simpkins introduced him to the Bath Club and his first match was for the United against Portsmouth RFC in the 1936-37 season. Bath won 15-3. His 1st XV debut came the following season when Bath lost to Bridgend RFC 10-17.

He captained the Bath Sevens team who won the County competition in the 1947-48 season.

Brainy, quick witted and fast, he has been one of the cleverest footballers in recent Bath history, and some of his performances at Full-back have been stamped with the hallmark of class.

Off the field, a club man with never an ill-word about anyone, but a friendly and good mixer, altogether a really delightful man.