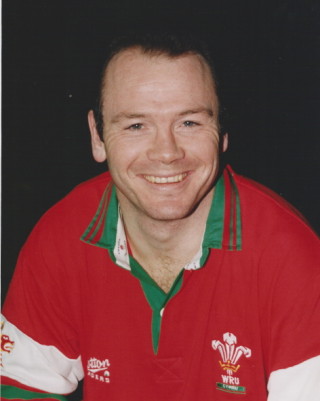 Joined Bath in 1997 and played a huge part in the success of the 1998 squad who won the Heineken Cup.

Prolific (and record) try scorer for Wales and went on 3 tours with the British and Irish Lions – to Australia in 1989, New Zealand in 1993 and South Africa in 1997. His four tries against the All Blacks in 1993 made him the Lions top try scorer

Wales’ former record try scorer with 33 to his name (Gareth Thomas overtook him in 2004), Ieuan Evans signed for Bath Rugby in October 1997 in what was seen as an exciting move by the club. The former product of Carmarthen Quins had enjoyed a momentous career with traditional Welsh giants Llanelli and had gathered 72 caps, taking part in three World Cup tournaments in 1987, 1991 and 1995. By signing Evans, Bath had secured the signature of one of the great rugby wingers of all time. As well as his major haul of caps and tries for Wales, Evans had been an integral part of the British Lions successes in Australia in 1989 (where he poached the winning try after David Campese’s famous error) and in South Africa in 1997 (where he was unfortunate to get injured after the first test match). Evans made his debut for Bath Rugby in a typically entertaining match against Richmond at the Rec., and celebrated with a brace of tries in a 47-31 victory. After that there was little doubt that he would be selected for the Heineken Cup quarter final tie with Cardiff and he kept his place in the side for a further five games after that, before sitting out the Cup tie with London Scottish. Back for the next cup match with Richmond, Evans was included in the starting team for the Heineken Cup Final in 1998 and made a telling contribution to the victory. A wayward kick by Mike Catt had landed neatly for Brive wing Sebastian Carrat and he seized on the loose ball with three-quarters of the field in which to run. Showing Evans a neat turn of pace he seemed to be away from the Welshman, only for Evans to reach out and make the tap-tackle of his life to bring the flying Frenchman to the ground. Bath of course went on to claim a memorable victory. Upon the return from France Evans was back in action scoring tries in the wins over Wasps and Harlequins and a brace against London Irish in a 49-35 victory. He repeated the feat in the home match with the Exiles and ended the season with eight tries from 23 games when he went over in the return fixture with Wasps. 1998/1999 was a case of after the Lord Mayor’s show for Bath and Evans who saw out his career with a further 14 matches, beginning 11 of the opening 16 matches for one try (in a win over Swansea). His final appearances for Bath were from the replacements bench and the last time he ran out in the blue, white and black was as a substitute for Mike Catt in a 16-11 home win over Newcastle. A true rugby legend that Bath fans were fortunate to witness in the flesh in his twilight years.